On August 28, 2021, Campau Park ( part of SECA-South East Community Association)  was host to the inaugural –One Peace Festival, a one day all-ages Hip Hop, health and wellness event. Coming in October, Friends of Grand Rapids Parks will be  hosting a Pumpkin Party in Campau Park.

And now, a very exciting addition has come to this park -the 2021 ART PRIZE entry by local artist,Edwin Anderson.  Mr. Anderson has transformed an entire basketball court into a mural honoring basketball giant Kobe Bryant and his daughter Gigi Bryant, both of who passed away in a tragic accident in 2020. It’s an amazing piece of art!

In addition to these events, Campau Park has many amenities with recent updates of splash pad, colorful playground equipment, picnic shelter, 2 basketball courts and restrooms. There is a large open grassy space to the west for more recreation.

If you haven’t visited John Ball Park Zoo lately, you are in for a surprise-as were we. The occasion was a  weeklong visit from my 4 year old grandson and we were looking for some fun activities to do with him.

It had been 3 years since we last visited and immediately I saw changes-the great John Ball statue where so many children have their photo taken with the park’s benefactor, now sits inside the zoo entrance and the paved trails throughout the zoo have taken some new turns (get the map!).

Our visit started with a 3$ funicular ride to the top so we could walk down through the exhibits.  Our favorites: the red pandas, (a different animal than the familiar black/white panda), the chimpanzee exhibit, and the mama wallaby with a joey in her pouch- who made his appearance  outside the pouch a few times. The walk through budgie aviary (parakeet in America) was a great hit with my grandson, who had a budgie alight on his seed encrusted stick.

From now until September 26, 2021, the Zoo is featuring a fascinating exhibit of larger-than-life brightly colorful animals made from tiny plastic toy bricks.   The exhibit comes from Great Britain and was made by BRICKLIVE Supersized.  Since all the animals depicted are small-to-tiny in real life but have amazing skills, the exhibit is named SMALL AND MIGHTY.

There is an entry fee to the zoo for anyone 3 years and up, BUT the Grand Rapids Public Library has FREE passes for anyone with a library card AND the JUMP program offers FREE admission for anyone with a MI Bridges card (up to 9 household members)- except Aug 5.   ALSO on WGVU Kids Day, 8/5/21, admission is only $5 per person.

For a 4 year old, who is very inquisitive and has a memory like an elephant, this excursion was a hit. He had lots to tell his mom and dad, when he got home!

Garfield Park is located at 250  Burton St SE  (between Madison and Jefferson).  It is one of the city’s larger parks consisting of 36 acres including the adjacent Burton Woods, a wooded nature preserve of 6 acres on the SW side of Garfield.

These parks provide an amazing green space in SE Grand Rapids and they have an even more amazing history.

The park was established in 1906 with the donation of 25 acres from their family farm by Charles W. Garfield and his cousin, Julia Fletcher. Charles Garfield was a prominent citizen of GR who “did more than any person to shape the course of the physical city over a 40 year span from 1894 to 1934”(from Keep on the Grass, by the Grand Rapids Historical Comm.).   In addition to being a farmer, banker, and legislator, he also founded the Michigan Forestry Commission, lobbying for the early reforestation of Michigan, after logging had destroyed much of Michigan’s native woodland.  A commemorative marker at the base of a sycamore tree that he planted in Garfield Park, reads: Memory Tree, Chas. W. Garfield, Useful Citizen, Lover of Trees.  Although the influence of this “Useful Citizen” looms large in the history of our state and city, it is said that his modesty and love of nature stood out as the most important part of his legacy.

Today the park boasts large open areas with many mature trees and playing fields for all types of sports, including an 18 “hole” disc golf course.  The park has a Kaboom playground, found in many of the city parks and picnic spaces with shelters. In 1953, 2 swimming pools, a wading pool and gymnasium were added.  The pools closed in 2010 but there is an effort  underway to bring a new splash pad to the park.  The gymnasium is now used as a community center.

After being closed during last summer (2020) due to the Covid pandemic, the 3 City swimming pools will be once again open for business this summer- 2021! This includes Briggs Park pool on the NE side!

The swimming pool is the dominant feature of Briggs Park and is a really neat facility. The pool depth ranges from the 2’4″ shallow end to the 12′ deep end with a diving board. A giant waterslide, concession stand, accessible handicap lift, restroom/locker room and picnic tables are all part of this turquoise blue oasis of summer fun. We walked along the outside of the fence this cool May Day, admiring the structure and visualizing a hot July day with dozens of kids, splashing, making noise and enjoying the “dog days” of summer. It took some conjuring as we were in our down coats, trees still in bud and the swimming pool was empty!

Another Kaboom park (we are beginning to recognize them now, distinctive bright colors and innovative structures). Also look for a basketball court, tennis courts and picnic shelter. Free public wifi!

Below, natural materials used in playground structure of a Kaboom Playground 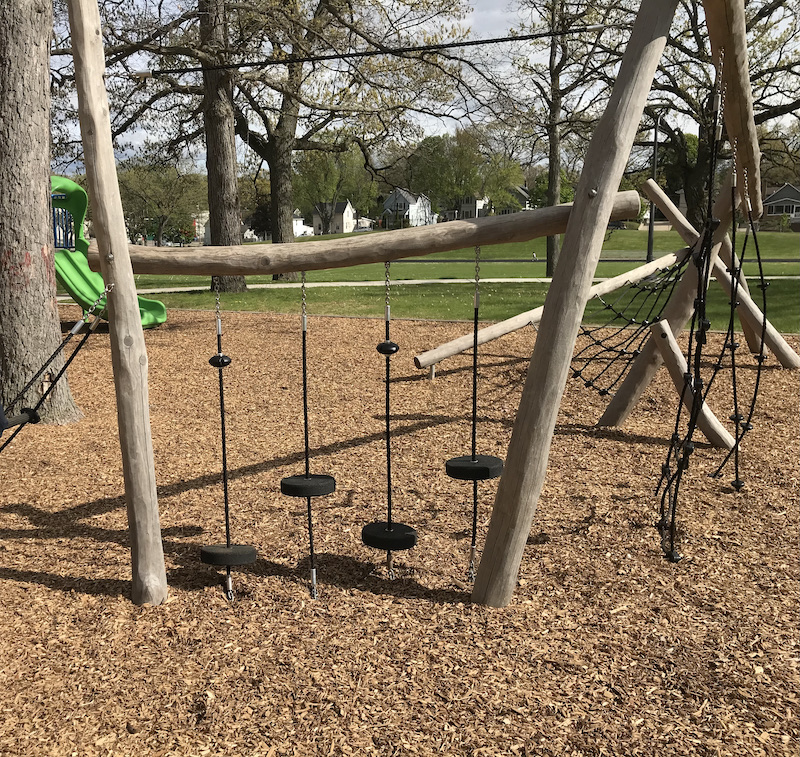 Aberdeen Park is a great park with all the expected amenities of playground, picnic shelter, bathrooms, splash pad, tennis courts and baseball diamond. It also boosts large open areas with beautiful old trees, some walkways and parking off Diamond Ave.

When visiting today, there were a few families cooking Mother’s Day dinners on a couple of the many grills available while the kids amused themselves on the Kaboom sponsored modern playground equipment. (Look for Kaboom parks throughout the city- their colorful innovative playgrounds are a real treat).

One interesting finding was in the park was an apple and pear orchard, planted in 2011 by community volunteers with the Creston Neighborhood Association. Sign says harvest is available to anyone.

The park is adjacent to the large play field of Aberdeen elementary and middle school to the North East and playground and parking lot of All Saints Academy (Catholic early elementary school) on the East. These 3 contiguous areas give the feeling of a wide-open space in the center of the busy NE residential area just east of Plainfield avenue. Very peaceful! 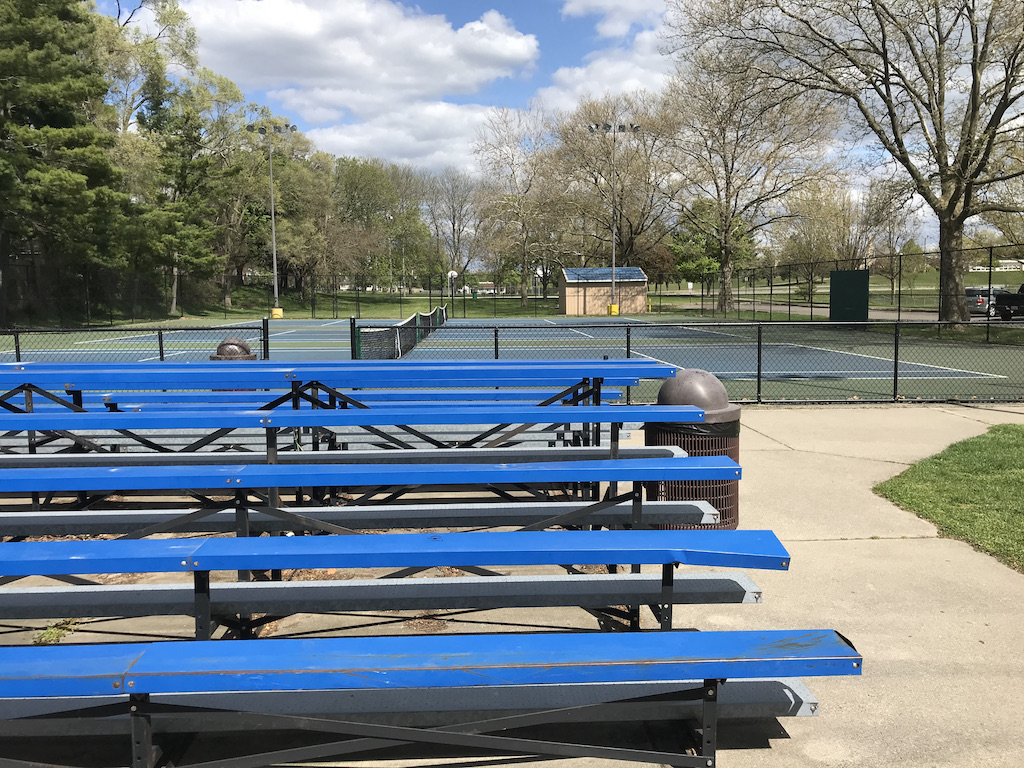 Although the fishing wasn’t very good and we didn’t see any fish ascending the ladder, still there were a lot of fishermen out in boats just below the dam. The water was flowing pretty dramatically with the snowmelt. We did see one good catch- a fish probably 24 inches hooked by a man casting off the edge of the river. Everyone around him seemed envious.

Fish use the ladder to bypass the fast flow of the dam and make their way upstream to spawn. Although there is some activity in the spring, the majority of fish spawn in the fall. Visiting the fish ladder in the autumn is amazing when the salmon are running! I’d recommend it to anyone.

The fish ladder was constructed in 1974. It is a functional piece of art, the design of which was created by artist Joseph Kinnebrew. There is a parking lot off Front Ave. just west of the fish ladder. Restrooms (in season) and free WIFI also available.

Catch of the Day!

Lincoln Park is a large neighborhood park on the NW side, bounded by Bridge Street on the north and Jackson on the south. A parking lot is accessed on the east side, off Marion Ave.

On this cold March day, snow was still deep in places, but the bright newer playground structures and the beautifully “muraled” park shelter house/community building drew us is. The shelter house is home to John Ball Area Neighbors, a NW neighborhood association which has a presence on Facebook. (I checked it out-pre-Covid looks very active.)

We had a nice stroll through the park, checked out the playground, the splash pad, the basketball courts and tennis courts. Large open area with lots of mature trees, benches and picnic tables must beckon neighbors in the warmer months.

This park was established in in the 1880s, making it one of the oldest parks in Grand Rapids. Many changes occurred through the years first with carriage paths, gardens, a fountain and later a dance/concert pavilion. A swimming pool was added in 1943, replaced in 2000. It was later removed in 2010 due to the expense of maintaining.

Yes, Grand Rapids owns a golf course! Golfers have the option to pay a daily rate (varies with day of the week, # holes, with or without cart and your age) or purchase a season pass, if you are an avid golfer. . The park underwent an update just recently, 2017.

But we were not there today to play golf, but rather to find what the park has to offer in the winter. We found at least 6 other people on the grounds this Friday afternoon, all doing something different. There were a few XC skiers like us, a couple of fat tire bike enthusiasts and one couple using the snowshoes that Indian Trails rents out. The ski trail is groomed and about 2 miles in length. The bike trail is 3.5 miles long and the snow was nice and deep for snowshoers today. Bring your own skis. The course features rolling hills with scattered trees and a club house and driving range.

We had been driving west on Leonard NE a lot lately, and noticing a lot of sledding at the corner of Lafayette and Leonard. Today we discovered this is part of the Mary Waters Park which has history dating back to 1891 when this area was a “streetcar suburb”, formerly farmland- Hard to think of this as the northern boundary! Mary Waters was the daughter of Dudley and Florence Waters who gave the city 4.5 acres in 1907, to expand the park.

The hill takes up a large part of the park along with a flat field with basketball courts to the south. An access road off Lafayette goes to the top of the hill where there is a playground, a splash pad and a covered picnic area-also bathrooms.

Highland Park isn’t easy to find as there isn’t much of an entrance on busy College Ave. NE, but drive around the north side of the park to Grand Ave and you will find a parking lot close to the playground equipment, bathroom and picnic tables.

This park has a lot to offer: sledding, disc golf, splash pad, playground and soccer field plus restrooms (in season-which apparently isn’t now!) There are free sleds to borrow on Saturdays, but this weekday the sledding hill was pretty bare even though there was plenty of snow in rest park. Apparently the hill had lots of use this past weekend! 27.9 acres, the majority of which is left in large open fields gave a wonderful sense of space and tranquility. Coldbrook Creek bisects this area, running east to west.

We were intrigued by the forested hill bordering the north side of the park and hiked a trail there populated with disc golf baskets.